It’s a crux with these holidays: When you think they’re finally over, the next one is just around the bend. Christmas, birthdays, Saint’s Days, … and Easter. Just around the corner, again.

And even though our beloved Easter bunny (apparently) has limited storage capacities (unlike Santa with his big sack), there are somehow always some small oder medium-sized toys (so-called SMT’s) that find their way into the nest where only chocolate rabbits and sweets should be.

But what if good ol’ Bugs accidently brings a duplicate or something unpopular, something endlessly uncool?

No worries, I have a replacement recommendation for you. I mean for Mr. Bunny, of course.

It’s called “Story Cubes”, a simple, entertaining, educating game, and it’s about pure storytelling. The packaging says: “Age 6+”, but it also works with younger children, showing us once again that storytelling is a human gift, engraved into our DNA, a pure form of human communication behaviour for which you need no education, no theory, just infant practice. 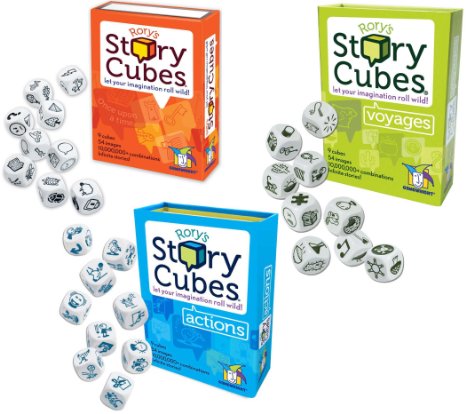 “Story Cubes” currently comes in three variations: the “classic” version, the “actions” version, and the “voyages ” version. You can play any variant on its own or randomly combine them.

It goes like this: There are 9 dices (aka cubes) per story cubes set, and every side of every cube carries a different image, like a monkey, the piece of a puzzle or a camera, for instance. The player whose turn it is throws all nine cubes at once. He then needs to bring the cubes into any given order by chaining one image to the next – like chapters of a story. While doing this, he tells the plot of the story he is just laying out on the table – the drama that turns the images from mere symbols into the different acts of a story. This can be short and sweet, or long and epic, depends on the player’s narrative breath and imagination.

What is interesting: The game has no winner or loser. It’s just about telling good, entertaining, surprising stories. Especially for children, but also for us grown-up’s, there’s a high level of creativity and imagination required, in order to have fun and entertain your fellow players.

Plus: You can’t fool kids like you can fool inapt managers or other advertising- and PR-spoilt business individuals: you can’t put anything over them, can’t simply chain one image or word to another and claim it’s a story, when it’s nothing more than bullet points or corporate messages (to stress the manager metaphor once again). And I made the experience, while playing Story Cubes with my daughters, that the infant, naïve rejection of a boring, plot-free succession of words not only happens when they are forced to listen (aka as audience), but also when they are the storytellers themselves. They actually interrupt themselves with the comment “Can I start again? This story is boring, nothing’s happening!”

That’s how they learn the craft – and intuitively follow the StorycodeX of Expectation, Surprise and Change. A CodeX that also needs another vital ingredient, the Hero or Protagonist who this surprising change is happening to, always an organic, unwitting part of my kids’ Story Cubes stories …

But I’ll write about the Hero Phenomenon in a later post – when I’m back from my Easter Holidays, NOT playing Story Cubes, as the rest of the Mr. Bunny’s presents were indeed a slam-dunk. 🙂